Did you know that there was an unreleased map of Dizzywood that showed far more about the known worlds than was ever revealed in the game?

The official in-game map was really quite small by comparison, encompassing only a handful of areas that were accessible, like Presto’s Grove, Presto’s Edge, Tanglevine Jungle and Canal City.

The original map, sketched by the incredibly talented Jake Parker and inked by the considerably less talented Scott Arpajian, shows many amazing places in Dizzywood that never quite made it into the game. This map was never published, and as far as we know, this is the very first time anyone outside of the Dizzywood creators has seen it!

In fact, the only place the map ever existed before was on a conference room table in the offices of Rocket Paper Scissors, the creators of Dizzywood.

Take a close look. What can you imagine happening in some of these lesser-known lands of Dizzywood? 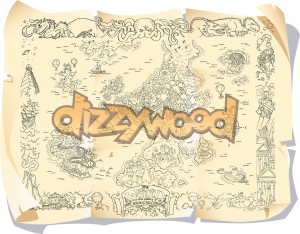 The original Dizzywood Map of the Known Lands (click for a bigger version).